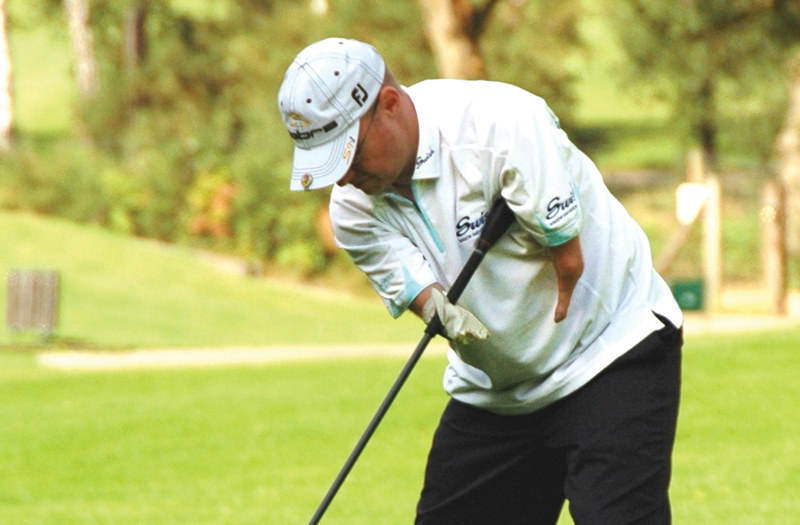 The competition organised by the Scottish Disability Golf Partnership brings top disabled golfers from around the globe to Westerwood Hotel and Golf Resort, Glasgow for a four day competition.

Tony, aged 40, who works as part of the sales support team at Swish Window and Door Systems, will lead out the 12-strong England team on July 15th.

The Shropshire-based golfer who finished third two years running in the British Open, said he was looking forward to the challenge.

He said: “It’s a fantastic honour to lead the England team out. It’s one of the biggest events in the disabled golfing calendar and attracts players from as far afield as the United States and Canada to Pakistan.

“It’s run on a similar format to the Ryder Cup with four teams including a world team, each with 12 players, it’s a fantastic setting and should be a superb event.”

Tony, who was born with arms ending at the elbows [COR] started playing golf as a child, taking up the sport in earnest in 2005 representing England in the Home Nations Cup at Celtic Manor in 2010.

Successfully cutting his golfing handicap from 22 to 14.3 in the past 18 months his current rich vein of form and previous experience as captain of the England diabled cricket team, made him a popular choice for the national captaincy.

“I played a lot of cricket through the mid-nineteen nineties through to 2000 or so and as captain I learnt a lot about helping people to get the most out of their game”, said Tony.

He continued: “I think I probably have a bit of a big mouth but if you really get behind someone, encourage and support them you can really lift them to a new level and I’ll be doing my best to do that in July.”

While national and international competitions are among the highlights of Tony’s sporting calendar, he has also recorded a number of successes at his home club, Horsehay Village Golf Club near Telford.

He said: “I play at least 99 per cent of my golf at Horsehay and as the only disabled golfer play against able-bodied opponents but despite that have still managed to record a few club competition wins.

“But that’s beside the way first and foremost it’s the support that has been important. It’s a great club, everyone is incredibly friendly and welcoming and if it wasn’t for that and the people there I wouldn’t be who I am and where I am today, I can’t thank them enough.”

Tony is also looking for additional sponsorship and support from local Midlands and Shropshire-based businesses. For more information visit www.tonylloydgolf.co.uk.

Tony will be in action July 15th to July 19th, the World Team Cup, Westerwood Hotel and Golf Resort,  www.sdgp.co.uk