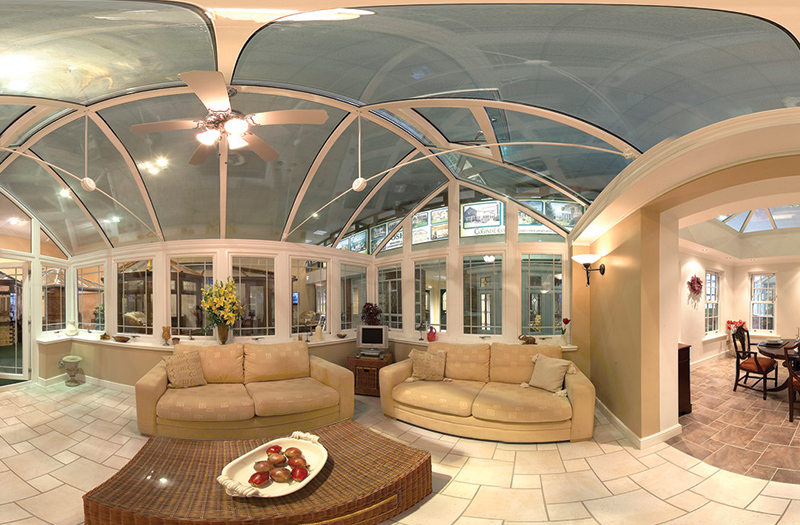 The sun room roofing system was launched by Quantal earlier this year, developed to facilitate access to new markets by emulating the interior appearance of an orangery but at a price more affordable to the end user.An internal soffit emulates the internal aesthetic of an orangery using a traditional conservatory construct with the aim of tapping into the aspirational consumer appeal of an orangery but combining it with increased flexibility and lower cost delivery.

The system, the first to be launched to the conservatory market, now also boasts a new timber grain effect GRP fascia detail. This features a relief detail at its bottom edge, and cornice detail at the top.

The fascia hides rafter ends and end stops, while a flat roof façade emulates the appearance of the flat roof section of an orangery roof.

Ian Cocken, general sales manager, Quantal, said: “Externally the fascia and soffit sits 300mm proud of the window frame so to all intents and purposes looking at the sun room system from outside or in, its appearance emulates that of an orangery but at a fraction of the cost and that gives it far broader commercial appeal.

“The other significant advantage is that ‘conservatory rules’ apply. If you’re fitting the Quantal Sun Room system you’re still fitting a conservatory roof so there simply aren’t the barriers to entry that exist to entry to the traditional orangery market.

The sun room system more broadly, is built around Quantal’s box section eaves system. Engineered to accommodate twist-fit brackets eaves sit on top of the window frame and forms the anchorage for an internal soffit.

Timber cross members are then fixed to create an internal frame and fix for plasterboard. An internal heritage cladding option means that a decorative internal cladding can be added to deliver an alternative decorative finish to the more contemporary ‘flat’ plasterboard option.

An internal top cladding is added to close the soffit from above. Alternatively Quantal also supplies a DGSU, which features a translucent film pre-fixed to the internal pane to hide fixings around sun room eaves.

Cocken concluded: “The additional benefit that the system delivers is that the sun room’s construction is significantly lighter than that of a traditional orangery. This means that it can be installed on original footings where an earlier conservatory is being replaced. This flexibility clearly has an impact on price, increasing affordability and market accessibility.&rdquo

For further information about Quantal and its product range, call 01626 832355, email info@quantal.co.uk or visitwww.quantal.co.uk.