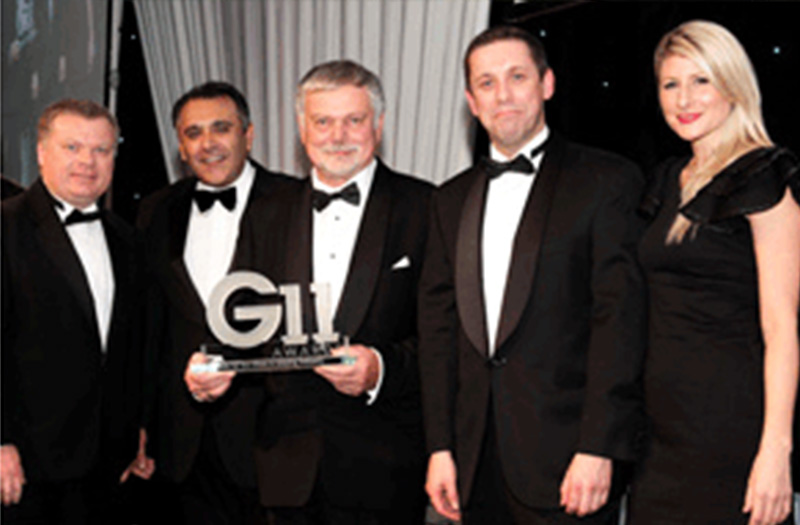 This year held at the Hilton Park Lane, the G11 Awards celebrate the best of the window industry across disciplines from promotional activity to installation.

Having been short-listed in the finals in 2009, Nolan uPVC scooped the award for Promotional Campaign of the Year in Retail with its ‘guess the identity of the Nolan Panda’ competition.

Rob McGlennon, divisional sales director, at Profile 22 parent, the Epwin Group, said: “It’s very easy in the current economic climate to lose sight of the innovation and exacting service levels that the window industry today delivers. G11 is a timely reminder of exactly that.

“On behalf of all at Profile 22 we would like to wish Nolan uPVC and Stafford our congratulations and look forward to offering them our full support in the coming year.”

Sarah Cleevely, marketing manager, Nolan, said: “We took a decision early in 2011 to explore alternative channels for our marketing spend and to move away from traditional spend on print, TV and radio to make that spend go further.

“This in particular, has seen an increased spend on our website www.nolanupvc.co.uk which now accounts for more than 35 per cent of marketing budget compared to just two per cent in 2008.

“The Nolan Panda has been around as a brand character since 2008, a lot of people were curious to his identity and so we launched the competition to guess who he was, primarily online but also integrating that activity with promotion on traditional channels.”

And it was a double win for Nolan uPVC as at home in Wales the campaign claimed the Institute of Welsh Affairs Creative Marketing Award the same evening.

Illustrating the spectrum of activity and achievement of the Profile 22 customer base, Stafford, part of the systems company’s Approved Commercial Manufacturer Scheme claimed the accolade of Public Sector Project of the Year Award.

Appointed in early 2011 to deliver an energy efficient window replacement programme across its 314 property portfolio by Bournville Works Housing Society, Stafford began the two-year project in May.

Representing the first large scale specification of PVC-U windows and composite doors to period properties in the historic area, the preservation and restoration of the character of individual properties and the area more widely, were prioritised as part of project delivery.

Dee Benning, commercial development director, Stafford, said: “We’re delighted to have secured the Award for Public Sector Installation of the Year despite some very tough competition.

“A few years ago we took a conscious decision to set in place a number of long term plans for the business. These included plans to cut overheads, invest in quality people and focus of the commercial sector rather than relying solely on a dwindling retail market place. This change of ethos has begun to pay dividends and seen us secure number of high profile projects including the G11 award winning project at Bournville.

“It means that the long term future for Stafford has never looked better despite some of toughest trading conditions the industry has seen for years.”